The Museum of Cordouan lighthouse and lighthouses and beacons in general is situated at the foot of the Grave lighthouse.

The Grave lighthouse, whose construction dates from 1859, is situated at the Pointe de Grave in the southern part of the mouth of the Gironde estuary. From the top of its 28 metres and 108 steps, this square tower offers visitors an impressive view over the estuary and Cordouan lighthouse.

The museum enables the lighthouse to be shown to those who cannot get out there, and also provides a general introduction to the operation of lighthouses and beacons in general. 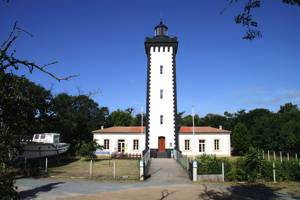 The museum comprises five rooms and is particularly noteworthy for : models of the six Gironde lighthouses, documents on Cordouan lighthouse itself, and documents on maritime signalling equipment. Images of Cordouan can be seen on a screen. From the gallery at the top of the lighthouse there is a magnificent panoramic view over the mouth of the Gironde estuary. The main sites of the locality are marked on its viewing table.